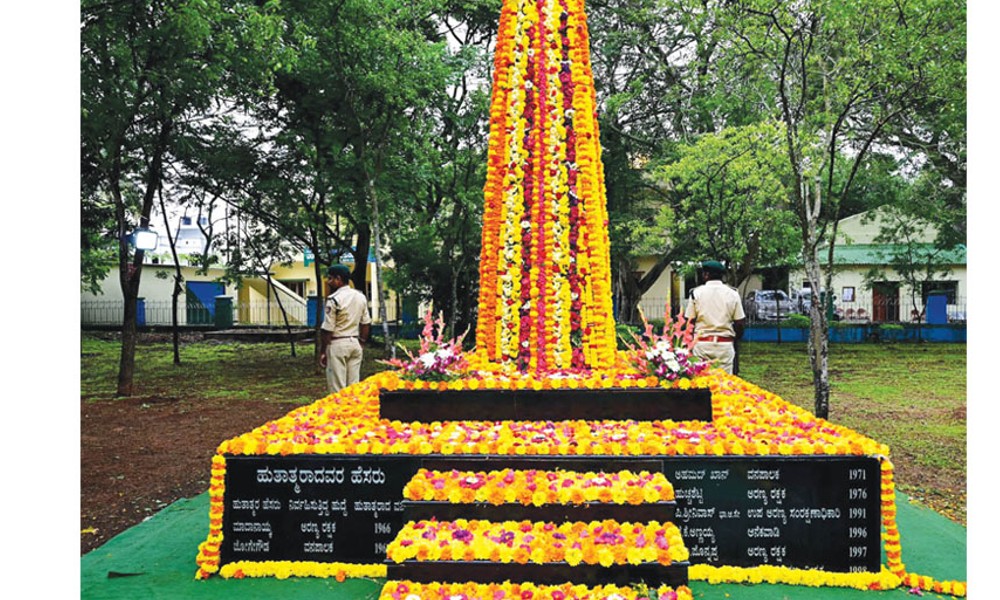 Tributes Paid To Saviours Of Jungles On Martyrs’ Day

Mysore/Mysuru: Forest Department staff who died in the line of duty were remembered at the National Forest Martyrs’ Day observed yesterday in Mysuru and surrounding areas where reserve forests and tiger reserves are located.

The main event in Mysuru was observed at Aranya Bhavan, Ashokapuram, at the late Venkataswamy Garden where floral tributes were paid to the 56 forest staff who laid their lives from 1966 till date. The event was held after an impressive march-past.

The dedication of the staff to prevent man-animal conflicts is praiseworthy. Jagatram appreciated the Department staff for protecting wildlife with available limited resources. The sacrifices of the Police and Forest Department in safeguarding the national property are invaluable, he added. 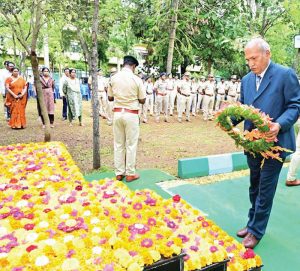 The 1979 batch Karnataka cadre IFS Officer had constructed Shakti Mariyamman Temple and the deity is strongly believed by villagers. In fact, even now, the first puja at the Temple is performed to Srinivas. As a mark of respect, the bust of Srinivas has been installed by the villagers at the entrance of Shakti Mariyamman Temple, giving the slain officer the stature of a deity.

Responding to the request of the villagers, the Forest Department officials collected funds and gifted the metal bust of Srinivas to the villagers. The Temple Trust will construct a mantap, for installing it.

It may be recalled here that in May this year, the Forest Department restored the jeep driven by Srinivas to running condition and turned it into a souvenir. This was the same jeep that Srinivas rode during anti-Veerappan operations in Kollegal and Chamarajanagar forests that extended into Tamil Nadu, the core area of the bandit.

The vehicle that was abandoned has been restored and has been kept in the museum at the office of the Deputy Conservator of Forests (DCF) in Kollegal taluk. The museum consists of photographs, letters, documents and write-ups of Srinivas.

At Bandipur Tiger Reserve, wreaths were placed on the memorial and floral tributes were paid after which the names of the staff, who have been martyred, were read out. Basavaraj H. Talwar, Judge, Senior JMFC, Gundlupet, spoke on the importance of forest conservation in the light of climate change and global warming.

P. Ravikumar, retired Chief Secretary, Government of Karnataka, who is the Chairman of Karnataka Electricity Regulatory Commission (KERC), addressed the Department employees who had taken part in a workshop on human-animal conflict and said that they should acquire technical training and implement the same in conflict resolution at the field level. Principal Civil and JMFC Judge Shivakumar, Bandipur Tiger Reserve Director Dr. P. Ramesh Kumar, ACF Naveen and other officers were present.

Sept. 11 marks National Forest Martyrs’ Day as it is the anniversary of the Khejarli Massacre (1730). The massacre took place in the Kingdom of Marwar when Maharaja Abhai Singh Rathore wanted to cut down trees near Bishnoi village of Khejarli. As one of the commandments of the Bishnois is not to cut down any green trees, the villagers pleaded the king’s representatives not to fell trees near the village.

After refusing to stand down to the king’s soldiers, the villagers led by a woman named Amrita Devi Bishnoi hugged the trees to shield them with their bodies. Announcing that they would rather die, the soldiers beheaded Devi along with her family and several villagers.

Other Bishnoi communities sent people to support the Khejarli struggle and 363 villagers were killed while protecting trees. Abhai Singh travelled to the village to offer his apology. He proclaimed an edict that prevented killing of animals and cutting trees near Bishnoi villages. The village came to be known as Khejarli after the Khejri trees that the villagers laid their lives down to protect. 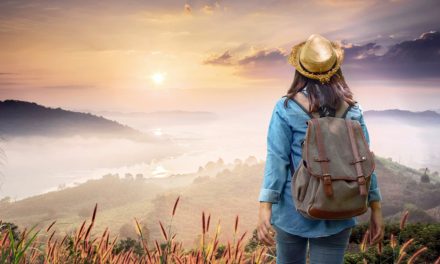 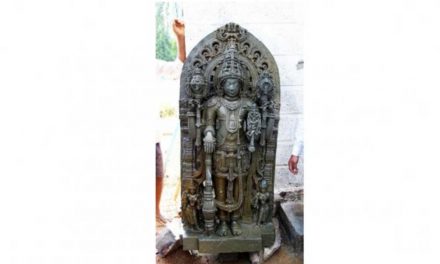 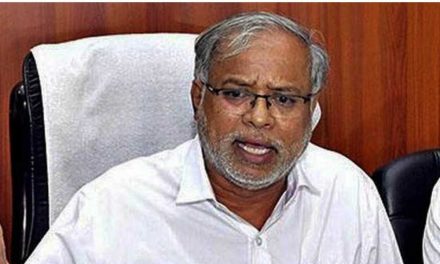 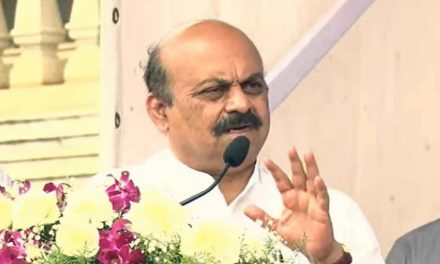