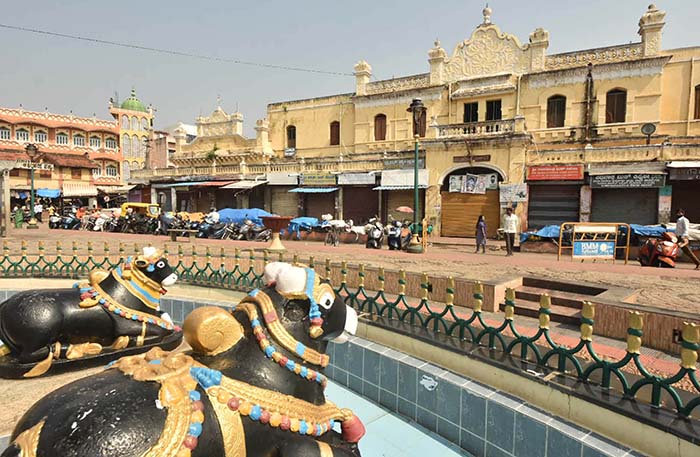 Mysuru: The 125-year-old Devaraja Market, usually teeming with shopkeepers and shoppers from dawn to dusk every day, wore a deserted look this morning with trade coming to a grinding halt as the Market was shut in protest against the proposal to demolish and reconstruct. 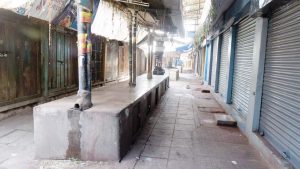 There are over 1,200 vendors (tenants) in the Market and all of them unitedly joined the protest call given by the Devaraja Market Tenants’ Association and not even a single shop was opened. Even the goods to the Market arrived late today and loaders had to wait till 2 pm to unload them into individual shops.

There are over 800 shopkeepers who pay monthly rent to the Mysuru City Corporation (MCC) and another 250 vendors are carrying out business by paying daily rent.

They are up in arms against the Mysuru District Heritage Committee’s decision to demolish heritage Devaraja Market and Lansdowne Building, paving the way for a new ‘heritage like’ structures in their place. 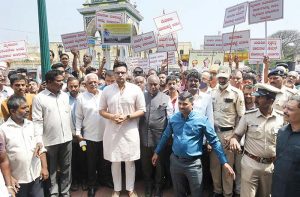 The gates of the Market were closed early and even the handful of customers who had come there hoping to buy fresh vegetables were sent away and were asked to come after 2 pm. A protest rally was organised from the Chikkagadiyara Circle (Dufferin Clock Tower) till the Deputy Commissioner’s Office and a memorandum was submitted to DC Dr. Bagadi Gautham at his office by five of the Association representatives.

Holding placards that called to save the Devaraja Market, the vendors marched till the DC’s Office shouting slogans, urging the administration not to spoil the heritage value of the city and also not to take away their livelihood. 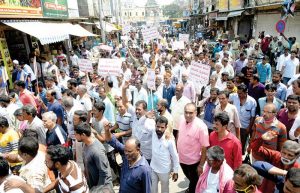 The protest rally was flagged off by titular head of erstwhile Mysore royal family Yaduveer Krishnadatta Chamaraja Wadiyar, who has extended his support to save heritage structures in the city. “Devaraja Market and Lansdowne Building are an integral part of Mysore’s heritage and every Mysurean has a physical and emotional connect with them. Once they are demolished, all heritage will be destroyed,” he said.

“Heritage is associated with history and if the buildings built more than 100 years ago are demolished and reconstructed, there will be no heritage or history. They will be just buildings sans history though it will be claimed as ‘heritage-like’ structures. The Mysore royal family will make all out efforts to protect the legacy and we stand with the vendors,” Yaduveer said.

“If there are proper engineering and restoration measures and if real heritage experts and conservationists are involved, both the Devaraja Market and the Lansdowne Building can be restored for posterity. Devaraja Market is associated with Mysore’s culture, art, language and literature. It is a proud experience to visit the Market daily and it must be saved for future generations,” he said.

Devaraja Market Tenants’ Association President Pailwan Mahadev said that the building is strong enough to last for a few more decades. “There is a conspiracy by elected representatives to demolish the heritage structure and now unfortunately the District Heritage Committee has supported them. Elected representatives are lobbying for demolition to satisfy their personal and vested interests,” he alleged. 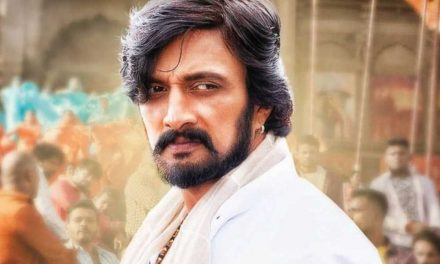 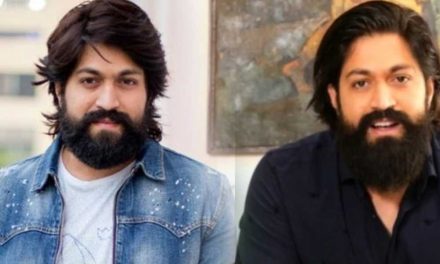 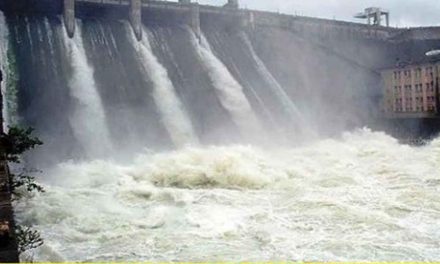 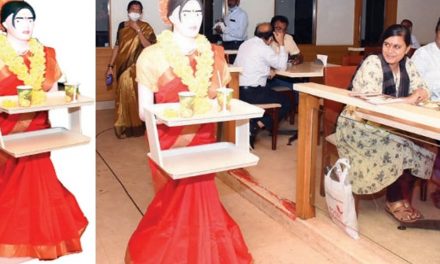